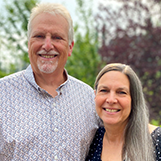 Bonjour from Yaoundé! We promised a report from Maureen’s visit to Mutengene. This is the hub of all the sourcing for CBC Health Services and the location for the receiving and distributing of all the White Cross cargo.

How Many Feet Does It Take to Wear Down a Path in the Rain Forest?

For Such a Time as This

We have been in Yaoundé just over two months now. We live in a studio apartment on the ground floor of the building.

Get to know Craig and Maureen Moody

The NAB is happy to announce that Craig and Maureen Moody are once again joining our international missions team.

From 1984, when Maureen first ventured to Banso Baptist Hospital, to 2018, when Craig and Maureen Moody worked with the primary healthcare program LAP, and the four other times serving in between those dates, it is obvious that God has placed Cameroon on this couple’s hearts.

In March 2022, Craig and Maureen will be returning to Yaoundé, a city where they previously served as house parents for missionary kids attending Rain Forest International School (RFIS). This time they will be serving at RFIS in new capacities: Craig will be the Finance Manager and Maureen will be the school nurse, in addition to working in nursing education with the Cameroon Baptist Convention. They will serve in these roles until June 2024.

The excitement of being a part of the RFIS team that supports missionary families as they serve in central Africa is certainly obvious when talking with the Moodys. To better prepare them for serving in this French-speaking city, they have begun taking French classes, and they will start two months of full-time language school in France beginning in January.

If you would like to join the financial support team for the Moodys, click on the link below to visit their missionary page.

Q – When did you first know God was calling you to the mission’s field?

Craig – While in college I went on 2 short term mission trips to Central America to build churches. After the second trip I knew God was leading me to a longer missions experience. So after graduation I went to Cameroon for a year. That was the beginning of a few mission experiences.

Maureen – When I was in high school I wondered if this was something God was calling me to do. I went on a short term missions trip and this confirmed that this was an area I needed to pursue and seek out if this was to be where I was to be serving. As I was about to start my career as an RN I thought I would go to Cameroon with NAB for 3 months to see where God led. Through the application process God revealed to me that he wanted me to commit to one year in Cameroon, so I did! While I was serving in Cameroon I met a young man who also had a heart for missions. We both were profoundly impacted by our time in Cameroon. That was the beginning of our love affair with Cameroon; the country and it’s people and yes, with each other too!

Q – How would you describe your first year on the mission field?

Q – What surprised you the most once you began your work?

Maureen – In 1984 I started my work in the Children’s Ward at Banso Baptist Hospital (BBH). I was shocked at seeing children die that would not have died back in Canada. Before arriving at BBH I didn’t really think about the consequences of not having the equipment, reliable electricity, vaccinations and highly trained specialists that I was used to having in Canada.

The lack of healthcare in rural areas and difficulties in transportation delayed initiation of treatment and resulted in challenging situations.

Q – What are some of the ways you have you grown since you have been serving overseas?

Craig – Developing a greater trust in God. Understanding that difficult experiences are opportunities to grow closer to God, to learn to trust God more and to learn that God is faithful to provide what we need when we need it.

Q – What advice would you give to those considering overseas missions?