Other posts from Rick & Debbie

Dear family and friends around the world,

The best part is that God has been in control the entire time and brought us through every day of it! The Psalms have come alive to us as we have faced these difficulties around us. We have learned to hold to the promises like:

God is our refuge

He is our Rock and Salvation

He is a shield around us

The Lord is my rock and fortress and my deliverer, my stronghold

The Lord is the strength of His people

The Lord is my light and my salvation, whom shall I fear?

Some of the sad events that took place were some of our friends lost their houses and belongings. Some had to flee their homes due to unrest. Some patients off and on during these last months have not been able to reach the hospital for care due to unrest. The PAACS residents left Mbingo and did some of their training at one of our other CBC hospitals in Banso for a month because of instability. We thank God that they are back now. 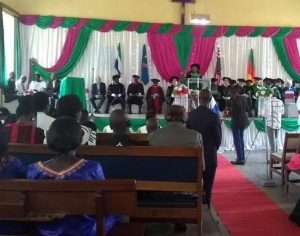 Some great events that took place during these last 3 months were weddings of two of our colleagues; CIMS/PAACS graduation (this year being recognized under the Baptist Institute of Health Sciences), and many opportunities to help those who had lost their homes and belongings. Our hospital and local churches here have really stepped up and took up special offerings for the ones affected by the crisis, brought food, bedding and clothing to the needy, and housed several people who had nowhere else to go. We were able to have some in our home for a while during some of the time. 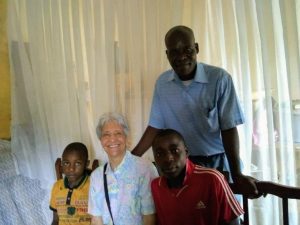 But let us tell you the best story that came about because of all the instability. I (Debbie) was with another woman from our church and we were visiting one of our members who had taken in a brother and his family who had lost their home. We were bringing them food supplies to help on behalf of the church. We met his two nephews in the house who were 10 and 8 years old. In conversation we asked the older boy if he knew Jesus. He told us that after he had seen the terrible things that had happened to people around him, he was scared for his own life. He realized the Jesus he had heard about in church, he didn’t really know, and he knew that Jesus would be the only thing that he could hold on to during this time that would help him. He told us that he had prayed to God and asked him to forgive him for not believing and living as he should and that he wanted to be a “true Christian” now. The younger brother was hearing this for the first time. We now asked him if he had heard about Jesus. He also said he knew a little but wanted to know more. We talked with him awhile and he very happily wanted to give his life to Jesus. He prayed to receive Christ that day, and we then informed the youth pastor about him so he could follow up.

July 1st Deb got to fly to the US with some friends. She spent lots of time with the grandkids, trying to soak up every moment! Rick joined her on July 20th for a couple of weeks. We both especially enjoyed time at a neighborhood swimming pool with the grandkids who all enjoy the water! Since our visits to the US are usually in the winter, we had not had a chance to enjoy this activity.

We were also able to attend the NAB Triennial Meeting in Edmonton, Alberta. It was a great time of reunion and renewal. We were so glad to connect with several of our supporting churches’ pastors and members who were there. The speakers were excellent, giving words of encouragement as well as challenge! We would have stayed on that mountain top for a long time, but behold, it ended, and we were sent out again into the real world. We are now back in Mbingo, where God is still at work and we pray we will always be a part of what He is doing. It is a privilege to serve God here and we pray His Kingdom work will continue to thrive.

One biblical practice we have been reminded of lately is ‘lamenting’. We don’t incorporate lamenting much in our churches today, ignoring the suffering of our culture. We focus more on celebratory time. Sometimes we just need to cry out to God in lament and repentance for what is happening in the world around us. Let us cry out to God for Cameroon, for North America, for ourselves! To quote our speaker at Triennial, “Lament, true lament, usually comes before true praise.”

In His Matchless Love,