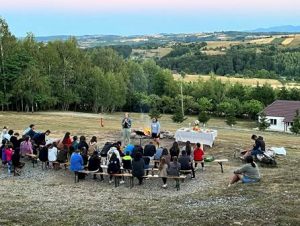 For the past month, we have been in full camp mode, seeing over 60 campers come out to Camp Falcon Rock each week. This year our theme for the camp was “Kingdom Feast,” looking at Jesus’s invitation to us to join him at the table. We shared this message over three weeks and saw many campers take big steps in their faith and relationship with Christ. On top of this, we saw incredible growth in those who volunteered with us this summer. We had our young adults from Szentkiraly lead the majority of the program this year, and we had a couple of international volunteers join us. One international volunteer was a young guy from Chicago whose parents immigrated from Romania right before he was born. This young guy is of Hungarian-Romanian descent but has grown up in America. It was special to get to have him join us for the summer and to see him connect with his roots. Our team was all-around an all-star team this year and worked really well, unified on the same mission to reach campers with the love of Christ.

During our first week of camp, we had campers from our village of Szentrkiraly attend, as well as from some of our neighbouring villages. It was exciting to get to spend this time at camp with the middle schoolers from our village as we had just started a junior youth program with them this past year. A couple of highlights from this week: 1) One young girl after the message on the first night introducing the theme of “Kingdom Feast” was unable to articulate exactly what God was speaking to her that evening but knew in her heart she was experiencing a deeper peace in hearing the good news of the Kingdom Feast, and this sent her on a deeper journey to understand the message throughout the week. 2) One young guy during the final free time block decided he wanted to just sit and read his Bible to learn more about God and the message we had been sharing that week. 3) A final story from this week came again from the boy cabins. One young boy in one of the cabins did not want to pray at all during the small group times that week; however, on the last night he asked his counsellor if he would sit with him as he prayed silently to God. Not only did the counsellor sit beside him in silence as he prayed, but the entire cabin decided to support this young guy by forgoing snack time and instead sitting in silence with him as he prayed to God.

The second week of camp brought in a whole new bunch of campers – most of whom were from the community. One group of campers came through a connection we made a few years back. A mother reached out to us about our work because she wanted her son to learn English, so she wanted to send him to our camp. She had no connection to the churches we worked with. Every year since then, she has sent her son and his friend to our camps, but this year she asked if she could send more. In the end, she sent 12 kids with her son to camp – all from the community. On the first night, we could tell this was a tough group of campers; they were not engaged in the message or the program. As a staff, we spent a lot of time praying for God to break down barriers to reach these guarded campers, and we praise God because he did just that. In the middle of the week, after the evening campfire message, one third of the campers stayed behind to pray with leaders as they desired to follow Christ with their lives. One group of girls who wished to stay behind were all from different cabins and of different ages and backgrounds, but they were excited to get to pray together with the leaders. Each of them had heard a unique and specific message from God to them about their faith journey with Christ. One was committing her life for the first time; another was being drawn deeper into her relationship with Christ; two others who had grown up in the church were making their faith their own. The invitation of Christ was heard clearly during this week, and it was encouraging to see so many campers respond to it!

For the third week of camp, we hosted a young adults camp where campers were mostly 18–25 years old. For this week, we had a speaker come who shared on the theme of 2 Corinthians 10:5, asking the question of what are we being held captive to. This theme of “Captive” proved to be a fruitful challenge to these young adult campers, as many are in a place of discerning what God is calling them into for their career, relationships, and life in general. We partnered with the Hungarian Baptist seminary in having one of their students be the worship leader for the week, which proved to be impactful for the campers as they engaged God through worship, as well as for the student himself as he had the opportunity to serve. At the end of the week, one third of the campers had to leave a day early due to the fact that a relative from their village was getting married. Yet, they all loved camp so much that they returned late that night after the wedding had finished to join us for our final camper fire together.

With the camps we help run now wrapping up, we have begun to switch gears and prepare for our upcoming home assignment transition. On September 22, we will be flying back to North America for an 8-month home assignment. This is the first full home assignment we have taken in 8 years. We have been a bit nervous with what that would mean for the mission here if we are to be gone for that length of time. However, we praise God that he has provided the Smith family to fill in while we are away. The Smiths are a perfect fit for the interim field director role, and the village is eagerly waiting for their arrival. In light of that, this next month will be working hard to prepare our house, the ministry, and our team for this transition. Please pray for us as we sort out a lot of logistics here in Romania, as well as all the logistics we need to figure out for living back in North America for our 8 months there.

We are so grateful for each of you and your partnership in the gospel. May God bless you in this season!