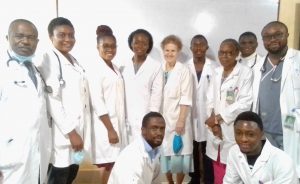 In June I had an opportunity to travel to Banso Baptist Hospital (BBH) with a resident. One of my goals has been to visit BBH on a quarterly basis in order to encourage the staff, to support the work there, and to expose a senior resident to another hospital where he or she is challenged to take the lead in teaching house officers. Unfortunately, fighting in the vicinity of the hospital continues – with gunfire heard on most days. When inviting a resident to travel to Banso, each one is given the option to decline. Since the conflict is drawn along anglophone/francophone lines, some francophone residents may not feel comfortable to make the trip. The resident who accompanied me in June is somewhat of a hybrid as she was born on the French side but did most of her education in anglophone Cameroon. She chose to go.

On the Monday morning following our arrival, the resident offered a very helpful lecture on an approach to abnormal liver function tests. Tuesday morning is traditionally Bible Study. During my years in Banso, I’d routinely prepared for and led Bible Study. Following my departure in 2018, the chaplains assumed this role. On Monday of the week we arrived, the head chaplain approached me to ask if I would lead the study the following morning. His comment was, “They need to hear from you.” My preference is always to go through a book of the Bible. In this instance, however, a topical study would have to suffice. Since the chaplains have made this request on previous trips to Banso, I’d already had a topic in view. However, late that Monday, I changed my mind – deciding to instead address the subject of fear. Making use of the white board, as we had always done in the past, Scriptures were written out the evening before. The
study was titled “Is Fear Healthy?” 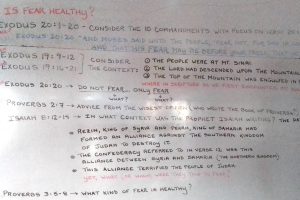 We considered The Lord’s injunction to Israel during the cataclysmic events involving Mount Sinai recorded in Exodus 20. At that time, Israel was told to “fear not . . . that His fear may be before you” (Exodus 20:20). We also considered events described in Isaiah 8, when Judah was under threat of invasion by the Northern Kingdom, which had allied with Syria. Finally, we looked at Proverbs 3. It was highlighted that while the world is indeed a dangerous place, our fear should be of God alone – as He “holds the keys of hell and of death” (Revelation 1:18). Following the study, after everyone had departed the lecture hall, the hospital’s Chief Medical Officer, Dr. Divine Jam, stayed behind to talk. He shared that some wthree weeks previously the BBH doctors had jointly submitted a petition to the head of the CBC Health Board requesting transfer. They were weary of the ongoing conflict compounded by recent kidnappings. All were afraid for their safety.

Their request had been denied on the grounds that BBH was the only hospital in the region providing services to victims of the conflict. Many with gunshot wounds are cared for every week. A sister hospital, within some three kilometers of BBH, while still open, is no longer providing such services. Therefore, BBH receives all trauma in the region.

The doctors, who would nevertheless ha 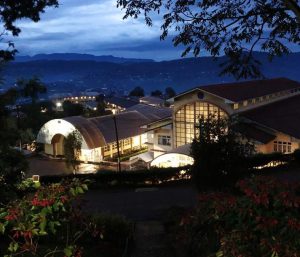 ve the option to resign, have instead remained. One of their number has applied for and been accepted to the Internal Medicine residency and will be joining us in Mbingo in January of 2022. It was a privilege to be present in Banso for a brief time to try to encourage hospital staff – who are very weary of the ongoing hostilities.

After returning to Mbingo, the next task at hand was to complete semi-annual evaluations for the Internal Medicine residents. Once this was accomplished, it was possible to return to the U.S. It has been wonderful to spend time with family and friends. It was equally a privilege to participate in last month’s NAB Triennial.