“You… joyfully accepted the confiscation of your property, because you knew that you yourselves had better and lasting possessions.”

At the beginning of January, I had the privilege of returning to my old “stomping ground” of 27 years. Following an 18-month absence, it was finally possible to greet the staff of Banso Baptist Hospital and work there once again. 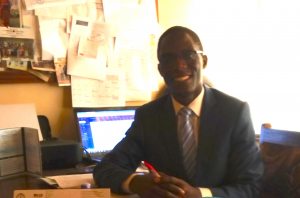 hile in Banso, I heard the stories of so many who have suffered deprivation as a result of being caught in the middle of the political turmoil affecting the region. Among the testimonies, one in particular that was very compelling belongs to our assistant administrator – a young man by the name of Jean Sama. I first met Sama in March of 2018, just 4 months prior to my departure from Cameroon for what I’d assumed at the time would be a brief leave. Sama’s appointment as the Assistant Administrator of Personnel came at a time when his true mettle would be tested. As the political crisis led to increasing violence in September and October of 2018, Sama found himself thrust into the position of having to assist staff who had their property stolen, their houses burned, and who were living under the constant threat of violence towards themselves and their families. Some sustained the loss of friends and relatives who were killed.

Aside from the trauma suffered by hospital workers, Sama also had the burden of nine satellite Health Centers supported by the hospital. Many of the Health Centers fared worse than the hospital. Some were directly attacked as a result of the conflict – forcing both patients and staff to flee. It was not uncommon for staff to seek refuge in ‘the bush’ – waiting for hostile forces to depart. Sama took it upon himself to personally visit each of these out-stations – to reassure staff, assess damages, and to chart a way forward. With the roads to many of these areas blocked or destroyed, Sama was compelled to travel by motorbike – far from the standard conveyance for an administrator of a large hospital.

With the local economy decimated, there has been no fuel available for purchase for many months. Periodic trips to the Regional Capital of Bamenda are required to obtain petrol and supplies. While residents of Bamenda also struggle under the burden of shortages, they are less severely affected than Banso. When trips to Bamenda became necessary, hospital vehicles would typically convoy for added protection. In anticipation of such trips, Sama met with BBH drivers to make arrangements. The roads can be unpredictable and quite unsafe – particularly at points where the military and separatist forces engage. On more than one occasion, when drivers expressed their fear of a proposed trip, Sama himself took the initiative to drive the lead vehicle. 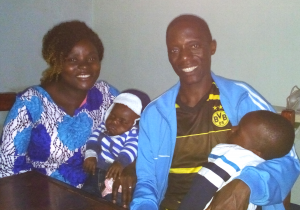 Through all these challenges, Sama has looked to The Lord for sustenance. He has also taken opportunities to speak to soldiers about The Lord. He related the account of one rebel soldier, a commander, who had been brought to the hospital after sustaining a serious gunshot wound to his leg. While his wound was grievous, the man nevertheless recovered. During his hospitalization, Sama shared the Gospel of Jesus Christ with the soldier. Initially, the man seemed indifferent – offering no response. However, later this separatist leader sought out Sama. The fighter then told Sama that he believed that what Sama had shared with him was the truth.

Prior to the battle which led to this man’s injuries, he had been convinced that he could never be injured or killed. Like so many others, he had engaged in occult rites purported to guarantee the safety of the recruit. The amulets, charms, and fetishes which bedeck the bodies of many of these fighters betray where their allegiance lies. This man was convinced that he was invincible. As a result, the bullet which shattered his leg also annihilated his worldview. Recognizing that he had been deceived by witchcraft, this rebel leader placed his faith in The Lord Jesus Christ. We are thankful for the courage of Sama and pray that he will continue to be used to draw men to the Truth.