Amputee Soccer – A Means of Hope


On a Friday in August after a week of accounting work, I went down to the primary school football (soccer) field by our mission compound hoping for a chance to play some soccer and unwind. As I was waiting for my chance to get on the field, I ended up standing by a young man who had a leg amputated. The two of us started conversing. I learned his name was Dieudonne, that he was an internally displace person (IDP) from Batibo (about an hour from Bamenda) and he was involved in running a non-governmental organization concerned with youth and peace initiatives, but also part of a fledgling amputee football club hoping/dreaming to represent Cameroon in an upcoming African tournament for amputee football in Angola in October. A little while later we were joined by Joel, another amputee and also an internally displaced person from Kumba. The two of them invited me to come watch them play an exhibition amputee football game on this very field on Sunday, August 25.

That Sunday the amputee football club joined in worship at Nkwen Baptist Church and a love offering was taken for them. Then in the afternoon we assembled to watch their match. I was truly impressed with their determination, passing skills and speed of some of these one-legged athletes. They showed a lot of heart. 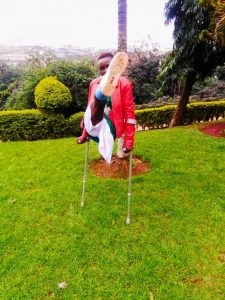 After the match, some of the team members approached me to see if I would help them get the resources to go to the tournament in Angola. They desperately wanted to go, believing that taking part would open up future opportunities for them. I said I would try and approach some people I had contact with. Subsequently, we shared together to draw up a draft budget. The team needed flight tickets, passports, yellow fever shots, visas for Angola, training/practice expenses, in-land transport in Cameroon & Angola, etc. It came to about $ 25,600 US. With the depressed economy here, that looked like a very difficult target, but we surmised we would be ultimately looking to God for this, and if He wanted them to go, He would make a way.

Conferring with NAB Field Director, Cal Hohn, funds were made available to the team for their September training and practice in Cameroon. (The team had to get to the capital Yaoundé, as in Bamenda in September we had to endure 3 weeks of “lock-down” – general strike which severely restricted movements.) Additional funds were allocated towards their flight tickets. This news really encouraged the team.

In Yaoundé the team practiced but also made contacts to seek support from the government and others. Two television stations broadcasted their goal and need; only a little support came in. I approached the Canadian High Commission in Yaoundé, some people in Canada and the US who have in the past supported ministries to people with disabilities in Cameroon, as well as the Cameroon Baptist Convention (CBC) ministry called Socio-Economic Empowerment for People with Disabilities. Buckets full of cash DID NOT come in. But what did happen is this:

In the nick of time with NAB funds, a partial loan arranged by the team president, and more that I still do not fully understand, flight tickets were purchased and the team (somewhat penniless) flew to Angola via Ethiopia. There in Angola their lodging, food, and transportation were somehow covered. 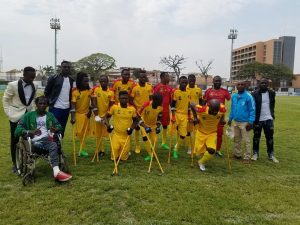 In their first tournament match they were pitted against defending world amputee football champions and home field favorites, Angola. Cameroon was thrashed 6 – 1. By the end of the tournament, Joel, the team’s speedster had been in an ambulance twice and the team finished 5th (out of 6 teams).

They returned to Cameroon in mid-October, somewhat humbled, but they also brought home the tournament’s “Fair Play Trophy” and plenty of vision, inspiration, and hope. Is that not something to thank God for?!

For security reasons, my movements off the Bamenda mission compound are limited and kept to a minimum. The risk of kidnap for ransom is great, as is happening to some of our national colleagues and friends. We need to keep beseeching the Lord for reconciliation and a better peace to come to Cameroon.

During this season of Thanksgiving we want to again appreciate the prayer and financial support of individuals and churches, facilitating this partnership and shared ministry with the church in Cameroon. Thank you. God bless.

“I can do everything through him who gives me strength.” Philippians 4:17