Other posts from Ron & Jeannie


Dear Partners in the Ministry,

Jeannie and I say, “Thank you so much for your hospitality and interest in our ministry,” to the eleven churches that we visited in Arizona, Kansas, North and South Dakota, Minnesota and Pennsylvania between May 5 and June 9. All of you, except for the churches in Pennsylvania, had the opportunity to meet Marijana Čizmanski, our NAB national missionary in Serbia, and hear her passion for her work among the Roma/Gypsy people of her nation. You were all such a genuine encouragement to her, and she certainly appreciates your partnership. 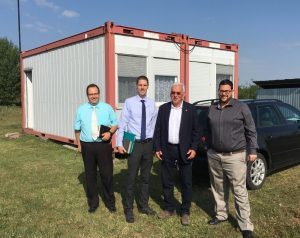 We got back to Europe on July 30, in time to meet a 3-man delegation from Grace Baptist Church of Kelowna, BC. Grace Baptist, like many churches in the NAB, is interested in developing a partnership with a church and/or ministry in Central Europe.

It was our privilege to take Pastor Brent Iseli, Darryl Seres, and Horst Grams on a 9-day Vision Trip through Transylvania, Romania, and central Hungary. They visited potential Baptist church partners and projects in Tomasi, Biharia, and Turde, Romania. They also toured Camp Falcon Rock, a joint venture of the Hungarian Baptist Union of Romania and the NAB, with NAB missionaries Paul and Tanya Gericke and Vern and Gloria Wagner.

In Hungary the trio had the opportunity to experience what Roma village ministry is like by participating in the morning and evening summer camp program in Boldog, Hungary, with Laci and Eszter Daroczi-Csuhai. They are returning to Kelowna with a much better sense of the great needs of this part of Europe and perhaps a clearer vision of where the Lord wants them to become a partner.

If your church is interested in a Vision Trip in Central Europe to learn how you too can become a more involved partner in missions, contact Randy Schmor, Director of Gateway Teams, or Ron. 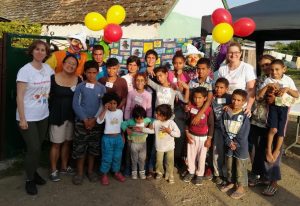 Sometimes spiritual breakthroughs happen in the midst of trials. Marijana Čizmanski and her ZZ Serbia team recently held a four-day camp in their village of Donji Petrovci. The children here are very poor, often abused, have little to eat, and do not go to school. There is much anger and fighting. On the first day of camp one of the children stole a valuable smart-phone out of the purse of a ZZ Serbia team member. He ended up senselessly destroying the phone and all the saved data on it!
Summer in Central Europe for our community development teams means day camps in their Roma/Gypsy villages.

No one in the village expected the team to come back the next day, but they did. The ZZ worker who had lost the phone also returned. The mother of the destructive boy came up to her and pled, “Please remove the curse you placed on my son.”

“What curse?” the worker replied.

“The one you put on him for destroying your phone,” the mom answered.

“I didn’t put a curse on him,” the worker said.

“Why not?” she asked with some surprise.

“Because I love your son,” the worker said.

“Because Jesus does,” was the worker’s answer.

Marijana reported that the spirit in the camp among the children changed noticeably after that.

Laci and Eszter and their team are running three camps this summer in the villages around Hatvan. Several weeks ago, they went into the new community of Apc, by invitation from the village’s social worker. The 3-day Bible camp was well-received, and the village has asked the MEK Hungary team to return and begin ongoing ministry there.

Around 25 children attended the camp in Boldog, which featured both morning meetings as well as evening programs to attract the children’s parents. The evening activities included arm-wrestling, folk dancing, games, karaoke, testimonies, and food. We were all very pleased with the growing number of volunteers, both from the community and the nearby-churches, who helped run the camp. Next week the MEK Team will be in the village of Zsambok. 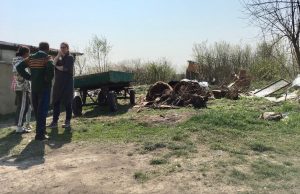 On August 31 our building team from North and South Dakota will be arriving in Belgrade, Serbia, to construct our second shipping container-community center-church. The six-meter by six-meter structure will be built in Donji Petrovci, Serbia. It will be used by Marijana Čizmanski’s ZZ Serbia Team for children’s clubs, adult community development meetings, Bible studies, church services, and community events. The houses in Donji Petrovci are unsuitable for these purposes. They are very small, with dirt floors and no indoor plumbing or electricity.

Erv and Marty VanVeldhuizen will again be leading the team of welders, carpenters, metal workers, electricians, dry-wall installers, painters, and children’s workers. If you or your church would be interested in partnering with us on the next container building project in Central Europe, contact Ron.

CHE EURONET TEAMS TO MEET IN ALBANIA FOR THE “GATHERING”

We will be holding our fourth annual CHE EuroNet Gathering, this time on the coast of Albania, October 2-6. As CHE Central Europe Coordinator, Ron is responsible for organizing this event for all the Community Health Evangelism Teams and Boards in Central Europe and the Balkans. The focus is on fellowship, networking, planning, inspiration, encouragement, and learning best practices from each other.

This year’s Gathering will include a 2-day workshop on Disciple Making Movements led by Eno Demiral, Director of Global Nomads, to add a powerful evangelism and discipleship tool to our workers’ tool boxes.

We are now in the process of making plans for Laci and Eszter Daroczi-Csuhai, NAB Hungary national missionaries, to visit the US and Canada in February and March. If your church is interested in having Laci and Eszter visit, contact Ron.