Other posts from Vern and Gloria

View all of Vern and Gloria's posts Read More Voices

The Aplington Team Comes to Romania

Hello from a very warm Romania.

We are trying to get used to the hot humid weather here in Romania. Vern has been chopping our winter supply of wood and dreaming about the cool days when we can start a fire.

Summer has been very busy – we have been enjoying new potatoes from the garden and even attempted a batch of beet pickles. The farmers are busy in the fields; most of the wheat and canola is harvested and sunflowers will be next. 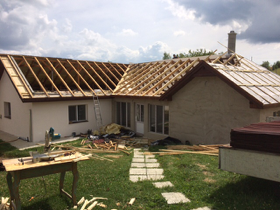 A joint construction team arrived from Central Baptist in Edmonton and Pilgrim Baptist in Vancouver on May 13. It was good to have the whole team billeted out here in the village as it gives you such a feel for the culture and people here. 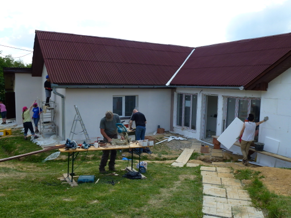 The team worked very hard painting, stuccoing, tiling, and finishing off the girl’s wash/shower room. These team members came as strangers and went home as family; we so appreciate all of their hard work and their love for the ministry here and Camp Falcon Rock.

June flew by as we were very busy at the camp painting, tiling, and mowing grass. Camp Falcon Rock got hit with a hail storm the end of June – golf ball size stones did a lot of damage to the roof on the existing building rendering it ruined. Vern, Tamas, and a few willing helpers took the old shingles off and a new metal roof has been put on. 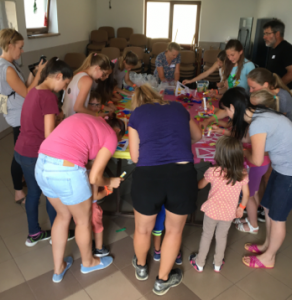 Aplington Baptist from Iowa sent a team to help us with our VBS programs and they were with us from July 1-11. We started with a 2-day VBS in our village of Szentkiraly so that the youth from our village, who usually volunteer with us, could join in on all the activities, crafts, games, singing, “Where’s Waldo” hunt, and bible stories. The youth and the Aplington team joined us to help with VBS in four more villages. It was great to have all of the help with the activities and we were encouraged to see about 160+ children attend them.

While the Aplington team was here, we spent a day at Camp Falcon Rock where we were joined with another team from Pennsylvania that was visiting a nearby village. A fun day was had by all as there were games played and a BBQ to end the day. It was great getting to share the vision and need for the camp and it was encouraging to see the team’s excitement. 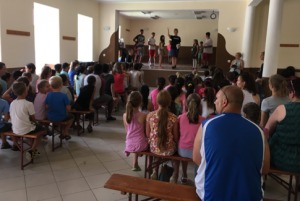 On July 22–August 2 we were joined by a team of 11 from four different Alberta and BC churches. We did a 2-day VBS program in four more villages. We were excited to share God’s everlasting love with about 200+ children.

It is very easy to see God’s spirit at work around us and so encouraging to see not only the folks from our village but the teams that come here from North America who are mostly strangers to all of this, when they are here and leave, are filled by that same spirit. Thank you Jesus.

Thank you to everyone who prays for us. It is so evident when something happens that isn’t on our radar and we have just enough of whatever to get it sorted out—be it energy, patience, willing hands, finances, or a new roof. God’s spirit is strong here, so thanks again for all that you folks are doing to bring His kingdom down on this place at this time.