BBH physicians together with fourth-year resident Dr. Lubeka, standing to my right. 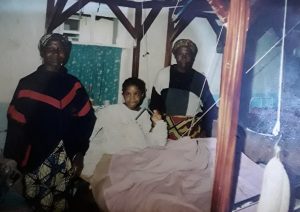 Nina Lubeka in 1999 – as a child of 9 years – flanked by her aunt and maternal grandmother.

Every two to three months during the year it has been a privilege to take a senior resident to my former place of work: Banso Baptist Hospital (BBH). We have found this to be a productive time – a week during which the resident can take charge of teaching house officers. One such trip with Dr. Nina Lubeka late last year proved a special blessing to the BBH staff. As we commenced our work in Banso, Dr. Lubeka was called up at Monday morning chapel to be introduced to the hospital staff. There she offered an amazing testimony – as Dr. Lubeka had herself been a patient in BBH as a child. She shared with those gathered that she had longed to come back to Banso for many years – having vivid memories of the care she received on the pediatric ward. What follows is her story.  . . . 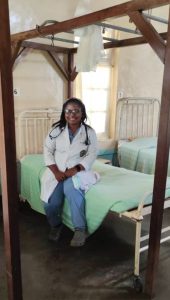 Dr. Lubeka in 2021 as an adult physician – sitting on the same in-patient bed she had occupied as a child on BBH Children’s Ward.

In the year 1999, as a child of 9 years, Nina had been visiting her aunt in another region of the country. After a weeklong visit, Nina, along with her mother and brother, boarded a 30-seater public transport vehicle to return home to the village of Ndop in the Northwest Region of Cameroon. En route, their 30-seater bus, which was filled to capacity, sustained a head-on collision with a large lorry. This resulted in the deaths of everyone on board the bus except for Nina herself and the driver. Having survived the crash, Nina was brought to Banso Baptist Hospital – where she was admitted to Children’s Ward with bilateral femur fractures and a head injury. While a patient in BBH, she has vivid memories of being cared for by Dr. Peter McCormick – a British physician and colleague who eventually spearheaded the Child Cancer Program for the Cameroon Baptist Convention (CBC). Nina also recalls my coming to see her for a consultation requested by Dr. McCormick. During that time, Nina – even at her young age – discovered the chaplains to be instrumental in helping her to understand more fully who Jesus is and 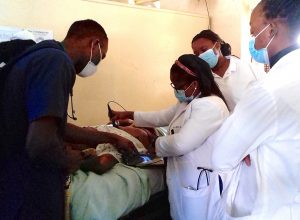 Dr. Lubeka providing instructions in use of Point-of-Care Ultrasound to BBH house officers.

When Nina was eventually able to walk, she recalls being taken to a special playroom for the children. The pediatric playroom project had been spearheaded by one of my nephews over 20 years ago. There, Dr. McCormick taught Nina and the other children how to play Bingo! After spending a total of three months in the hospital, Nina was discharged to home. She spent her primary school years in the village of Ndop – which lies between BBH and Bamenda. Having lost her mother to the horrific motor vehicle crash, Nina was cared for primarily by her maternal grandmother. She subsequently attended secondary school in Bamenda. Eventually, she was accepted to medical school at the University of Buea in the Southwest Region of Cameroon – graduating in 2016.
what He came to do.

Thereafter Nina joined the Christian Internal Medicine Specialization (CIMS) program in Mbingo, where she is now a senior resident. Dr. Lubeka spent the week in Banso mentoring house officers and offering lectures during our morning didactic sessions. During the course of the week, she made some valuable suggestions for improving patient care. It is gratifying to see how this physician’s past experience as a patient in BBH instilled in her an interest in a medical career – while also helping to mold her into an empathetic and compassionate physician. Following Dr. Lubeka’s graduation in March of this year, she will be posted to serve with the CBC Health Board as an Internal Medicine specialist.