It was the early morning of July 10. Coming to the end of a four-year term, Florence and I were scheduled to fly out the evening of the next day for a nine-month to one-year home assignment period. This was the first time I was looking forward to a furlough as a relief from the tense political climate that we experienced for the last year and half. But there was a hitch. Florence’s Cameroon passport renewal, which had been applied for in April, had not yet been received. I know Philippians 4:6 says we should not be anxious, but I could not help being “uncomfortably concerned.” We had prayed, asked others to pray, had contacted colleagues “who knew people, that knew people” working at the passport office in the capital Yaoundé. Now we could only wait on God’s answer. What a relief when George, a Cameroonian administrative staff, who works on passports, called that he had just picked up Florence’s passport. God is indeed good. 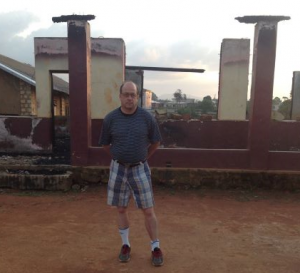 In the picture to the left, Walter is standing in front of a classroom block of Cameroon Baptist Convention Primary School in Nkwen, Bamenda. It is adjacent to our compound. It was set ablaze by unknown persons in August 2017 after the school had announced it would be starting registration for enrollment. Good news – funding was obtained to repair and expand the structure to accommodate students with disabilities. Bad news – the political situation remains unstable in the English-speaking part of the country, making the running of schools very difficult and uncertain. Indeed, many parents have sent their children to the French-speaking part of the country, so their education will not be interrupted. Many children in the English-speaking part of the country are not going to school, while some parents warily send their children amid frequent disruptions and security concerns. Please pray for a reconciling of this situation and God’s peace.

Briefly this quarter: The month of May had its usual plethora of public holidays, but their celebration was stunted and low key. In June, Walter and the staff of the Cameroon Baptist Convention Finance & Development Department held seminars in six different locations in the country to teach various finance staff and department heads changes needed as part of the implementation of the new accounting system introduced in 2017. The continuation of strike days and curfews affects the economy and Florence’s dental practice is feeling the effects too. In July, we traveled safely to Canada and were blessed to be a part of the NAB Triennial in Edmonton, with the theme and challenge of being “Shaped for Missions.” There we met many brothers and sisters in Christ from supporting churches. While we are here on home assignment, Florence’s dental clinic in Cameroon is being managed by her assistant, Ben. Right now, we are taking in some rest and relaxation. However, in the coming months we are hoping to connect, meet, and report to all those who have been graciously supporting and praying for God’s work in Cameroon.

If you are looking for a ministry to support in Cameroon, may I kindly recommend this NAB Special Project:

To give online, go to: https://nabconference.org/give/special-projects/, scroll down to “Cameroon – Assist a National Missionary” and follow the links.

Thank you for your prayers and support.