Kristi TenClay Get to know Kristi

Other posts from Kristi 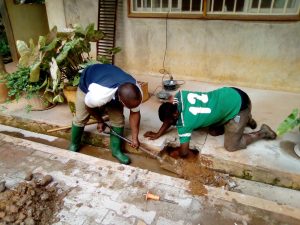 The year 2020 has been difficult! Mine probably hasn’t been any harder that some of yours, and it is still far from finished, but it HAS been tough. As seems more normal than not, it is when life is difficult and when burdens are heavy that we more faithfully turn to God, recognizing more clearly in our desperation the complete inadequacy of our own efforts and the absolute need for His strength and guidance.

I escaped to the coast for a few days at the beginning of July. When I first arrived, my reaction to the pounding of the waves was, “Wow, they just keep coming! If that isn’t a commentary on this year, I don’t know what is!” Before one wave completes its wash of the shore and is able to escape back to the depths, the next breaks over it, and the next, and the next. Can I just get a breath or at least catch my balance?! Will it ever stop? Upon further reflection and prayer, the conclusion I reached was an initially depressing but honest and simple “no.” The waves are not intended to stop, and they won’t in this lifetime. With oceans come waves. They are a part of the natural order that God has created and one of the ways His hand continually shapes and molds the shorelines. There are days when the waves are more turbulent and others when they are less intense. At low tide the upper shores get a brief reprieve and at high tide the lower shores are less directly pounded by the waves, but the waves will NOT end this side of heaven. On one hand that doesn’t sound so encouraging, but it is a call back to the reality check that God is still in control, and each wave, however uncomfortable, has a role to play. It isn’t about waiting for the waves to cease. It is about living in the midst of them and learning to treasure how God is using them to shape me. 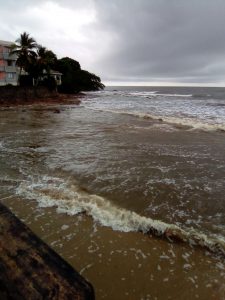 I spent many hours sitting at the hotel’s restaurant overlooking the ocean and a small river that empties into it beside me. Waves pounded upon the shore, breaking over sand and rock, their impact mostly invisible to the naked eye. Each day the tides rise and fall according to powers unseen and untouched by human hands. Only as the waters recede can glimpses of change can be seen in the shaping of the shore and the continually changing course of this little river as it cuts through the sand. The bulk of the change is gradual, with years or centuries or perhaps even millennium passing before anyone will notice the sharp, jagged rocks worn smooth by the sand, wind, and waves. The smooth stones hiding among the rocks and sand are proof of the eventual change.

On some level, the call to sabbath offers us a reprieve from the waves. Instead of standing with our feet planted in the sand and rocks, working to maintain our balance and keep our heads above the water, we allow our feet to let go of the shore, and we choose to float, resting in the assurance that wherever He takes me is where I belong and that when the time comes to once again set my feet to the ground I will be refreshed and ready to stand.

July is a time of sabbath for much of the RFIS community. All our employees are on their annual leave, teachers are gone, and most days will find only me and Ron (our Director of Technical services) in the office and a handful of summer helpers working to maintain the grounds. For me it is a mixture of trying to wrap up the ends of last school year and planning for the next. This year, that means a lot of stepping back and trying to make informed decisions and plans with somewhere between little and no valid data.

The reality of Covid is that it is NOT improving here, and though everyone in the missionary community is ready to get back to ‘normal,’ there is no scientific data to support that as a wise decision. Yes, the infection and death rate here is recorded as much lower than many other countries, but there is no way to know how accurate those numbers are. What we do know is that the medical system definitely could NOT handle the influx seen in many parts of the US. What does that mean for school? We have already moved our school year to start later, hoping that improves our chances of something resembling ‘normal’ school. However, Cameroonian schools have pushed theirs all the way into early October (about a month and a half after ours). My hope is that we will be able to function according to a hybrid schedule that only has half of our students on campus each day – allowing us some quality face-to-face instruction and relational time with our kids while they complete the rest of their work online. But even that carries a degree of uncertainty – will the Cameroonian government allow that? Will our field crisis management teams agree that it is safe? What happens if/when someone in our community is diagnosed? Where is the balance point between living in fear and exercising wisdom in our caution?

We have already lost one full-time teacher that we were expecting to arrive in July, had another unplanned retirement, and have two staff members delayed until at least mid-semester. We have eight others stuck in North America unsure of when they will be able to return. As of mid-July, 14 of our expected 73 students were still stuck in North America. At least one family has been trying for MONTHS to renew passports; some have had tickets canceled multiple times, and some have just given up until they hear someone else has managed to get here.

Our current hybrid plan has half of our students on campus at a time with no more than 10 students in a classroom together. Pray with me that this will allow us enough face-to-face time to connect meaningfully with our students and to meet the learning needs of those who have struggled so dearly with online learning, while maintaining a safe physical environment for our staff and students. To meet some of the needs created by our staff shortages, two courses will be taught entirely online by former RFIS teachers who are now back in North America (we are exciting to be able to reconnect with them!) and one course will be out-sourced to a North American online school. At the moment, there are another six that will be taught completely online for at least a short time, as tickets, visas, and other complications further delay their teachers’ arrival.

Uncertainty seems to endure as the defining characteristic of any and all plans we make. I am thankful to have had a short rest at the coast. It has been a reminder both that the waves ARE going to keep coming and that God is still in control of the waves and how they will continue to shape me and our little community.