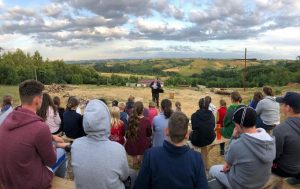 Our hearts are feeling pretty full after the last month of summer camps. It’s hard to even know how to explain everything that happened and all that God did. After years of prayer, planning, development and God’s unrelenting faithfulness, we were able to run a full month of summer camps at Camp Falcon Rock! Last summer we opened up the doors for a youth camp, and this year we were able to run a summer of programs for kids and youth of all ages. The theme and message we shared with campers this year was “Building the Kingdom of God”. We were excited to share with them about who Jesus is and what his mission for us and this world is all about. We could have never imagined how much this theme was going to come to life in the ministry of the camp. It was truly amazing to see God building his kingdom before our very eyes as we saw kids and youth respond to the Gospel. Thank you to all of you who covered these programs with prayer, support, and encouragement. You too were co-builders of the kingdom this summer at Camp Falcon Rock. Praise God for his wondrous works and for the power of the body of Christ! 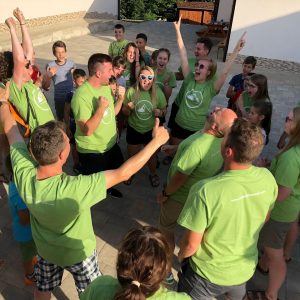 During the last week of June before our camps started, we ran a volunteer training program for our summer staff. Two Canadian volunteers, Haley and Jenna, were also at training as they came to join us for the month of camps. This year’s training time was very important. Our teens from Szentkiraly who have been volunteering for VBS over the past few years had never helped lead a camp program before. Their first experience of a camp was the youth camp we led last year, but they were the campers not the leaders. That meant that they were stepping into new leadership roles being camp counselors. We were encouraged to see how the teens stepped up this year and became disciple-makers at camp. It was fruitful having Haley and Jenna join us for the month as they were able to co-counsel with our teens and mentor them in their new positions. I loved seeing the two groups of young people come together serving hand in hand to disciple the campers. I’ll never forget the last campfire during the first week. After praying with a number of kids who wanted to give their lives to the Lord, one of our teens came up to me with tears in her eyes and said, “So this is why we do what we do at camp!” She was struck by how God was working in those kids around the campfire and the fact that God had worked through her to encourage those kids in their faith journey.

Our first week of camp ran from Jun 30 –July 5. We had campers ages 8-14 years old. We also had a youth team from Century Baptist join us to help run this week. At the beginning of the week during our staff devotionals we shared about how this first summer of full time camp programs would be like test driving a new car. You don’t really know how the machine is going to operate until you test it out. As you do that, you notice the good and bad things in how it runs. Yet what we saw was God’s hand on the whole operation. We couldn’t believe how smoothly everything ran for it being our first full week of camp. Even more, we stood back in awe of what God was doing in our midst for his kingdom. At the end of the week we heard testimonies from all who were involved about how God had worked in them that week. Campers, cooks, counselors, mission team members, CFR staff, all of us were impacted. That last campfire night was a sacred time. It didn’t matter where you walked on the property, everywhere you looked we could see small groups of people praying with one another. It was a beautiful scene! 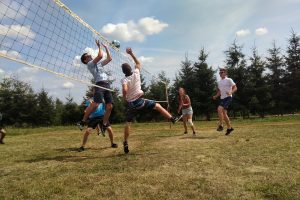 Our second week of camp ran from July 7–12 and it was primarily full of unchurched campers aged 9–15. This week, we didn’t have a mission team to support us so we were on our own with our small but mighty group of volunteers and joined by two more volunteers—Hannah and Riley. It’s always interesting to see how each week of camp is so unique from the next and this week was no different. We ended the previous week on such a high after seeing the response. As we stepped into the second camp, the theme of building the kingdom came to life in a different way. Many of these campers who came did not know who God was and some came from difficult homes. This week we saw the kingdom mission of redemption and restoration at work. There were two campers in particular that our hearts ached for. Two girls arrived at camp having just lived through the first week of a traumatic family situation. They arrived emotional and were very disconnected from the group at first. We prayed for those girls fervently and encouraged their two camp counselors as they tried to build a relationship with them. Praise God that by the end of the week these heavy-hearted girls found a new home amongst their cabin mates and leaders. It was touching to see them open up and connect with their cabin and engage in the camp activities with smiles on their faces nonetheless! Praise God for he is a God of redemption!

Our third week was a youth camp that ran from July 14–19. We had a mission team led by Lakeview Heights Baptist church join us for this week. Included on this team were members from Bethany Baptist and Unity Baptist. Again, this week was unlike the others. As we got to know the youth campers, we truly felt that we had future kingdom builders in our midst. We were able to dig deeper into the discipleship journey with these youth and even see many of them find confidence in their identity and calling over the week. The last night’s campfire was full of testimonies from the youth and leaders sharing about how God had prompted them to step out in faith that week. There was a common theme of God calling these youth to use their gifts to serve him. There were so many testimonies that the next morning at breakfast our wrap up turned into more testimony time! One of our favourite things to see is young people step out as kingdom leaders and we saw that first hand this week. We also were able to empower some local leaders to serve at the youth camp. One of the seminary students we work with volunteered with us this summer and was able to recruit 6 incredible musicians to lead us in worship for the week. This was definitely another highlight of the youth camp and led to some powerful moments for the teens. 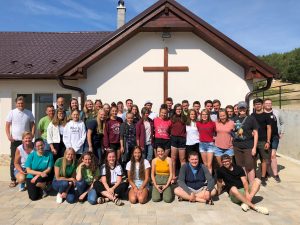 The exciting thing is that even though our camp-run camps are over, the camp is still fully booked for the rest of the summer. It’s extremely encouraging for us to see the amount of churches that want to use the camp for their own kids and youth programs. We have said that our maximum capacity for rentals is 70 people but the excitement to come to camp is too great and we are constantly finding ourselves overbooked. This week we have 96 kids out at the camp!! Seeing this makes us eager to move ahead with construction.

As kids have been running around the camp property, the construction team has kept on with the building projects. This past month their main project has been converting a 40ft container into a staff house. They are hoping to finish this in the next month so that Tamas and Tunde can move up to camp. Looking ahead, the team will be working on finishing the water and sewage system and working on some projects like building woodsheds to get us ready for the winter. We need to complete these key projects before we can break ground for the main lodge.

Thank you for being co-builders in the kingdom advancing work in Romania!