In mid-August, my wife Florence and I returned from Canada to Cameroon at the conclusion of an eight-week medical leave. In late May, I had a small stroke that necessitated the medical leave. Only one week after eagerly getting back to work, I was again sidelined with illness. This time it was Covid-19; 2022 has been a year of much time off for illness. Thankfully, God has granted healing and recovery.

Due to the Anglophone political crisis and its violence and insecurity around her Bamenda dental clinic, Florence opened a dental clinic in Douala, since many of her patients are no longer feeling safe to travel to Bamenda. This puts us apart for periods of time, which we do not like. While it was great to have Florence with me during the medical leave in Canada, it did not help with her dental clinic business. Recently, her dental practice has struggled with equipment breakdowns and numerous power outages due to a fire damaging an electrical substation in the area. Nevertheless, God is thankfully sustaining, and there is hope for better outcomes in the future.

In early September, after a violent clash between the military and Anglophone separatists, the wounded were treated at a Cameroon Baptist Convention hospital. For reasons not fully understood, the military detained the hospital administrator and two nurses. The two nurses were finally released, but the hospital administrator at the time of writing this newsletter is still being detained. We pray for his release. Confident of God’s sovereignty, we are thankful even in this discouraging situation. 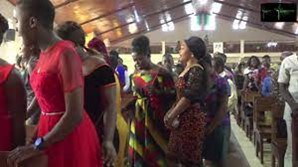 Christians at Nkwen Baptist Church dancing up the aisle to give their Harvest Thanksgiving offering on the third of four such Sundays, Oct–Nov 2022.

While in Canada Thanksgiving is celebrated on the second Monday in October and in the United States on the last Thursday in November, Harvest Thanksgiving is celebrated by churches in Cameroon within the October–November period, usually with two to four Sundays designated as Harvest Thanksgiving. On such Sundays, not only cash is given but also farm and garden produce, homemade snacks, livestock (chickens, ducks, rabbits, goats), clothing, and crafts and artwork made by church members. The non-cash offerings are auctioned in church before the worship service ends. 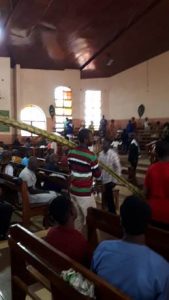 While this may not be everyone’s idea of what should happen in a worship service, this is part of Harvest Thanksgiving here. This year the volume of farm and garden produce is significantly down. A main reason for this is due to the political instability and attacks on people in their farms. Many fear to go work in their farms. Yet, thanks is still being given for God’s provision and that the plight of those who rely on agriculture can be brought before the King of kings.

By the world’s standards, 2022 here so far has not been a very good year. However, when focus goes to our Creator and Saviour, to our heavenly citizenship, we surely have much to give thanks for. Thanks to all who share in this ministry through prayer, encouragement, and support.