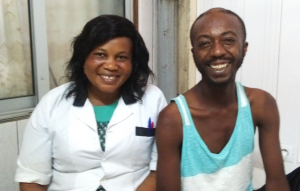 After returning to Cameroon in September, I spent the better part of a month working in Mboppi Baptist Hospital located in the urban center of Douala. While there, I was asked to see Elmer – a 38 year old Cameroonian male who was admitted for problems related to drug addiction. An educated man, Elmer had qualified as a State Registered Nurse almost 20 years earlier. Unfortunately, during his university days, he was introduced to marijuana. From there, he progressed to stronger drugs including cocaine and heroin. Surprised to learn that cocaine and heroin could be found in Cameroon, Elmer assured us that both drugs are readily available. In addition, Elmer often misused Tramadol – an intermediate opioid which is a significant drug of abuse for many Cameroonians. We have known for years, for example, that Tramadol abuse is a major problem among the Baka pygmies of Southeast Cameroon.

When I first met Elmer, he was languishing in bed. Curled up into a fetal position, he looked gaunt and malnourished. Elmer described his years of drug abuse and his feelings of powerlessness over his circumstances. Earlier this year Elmer had determined to cease his drug use and had been abstinent for several weeks. However, during this time he agreed to open his apartment to one couple, former friends, who were actively abusing drugs. Tears came as Elmer described how his close affiliation with this couple eventually eroded his resolve to remain abstinent. His relationship with this drug-abusing couple led him even further down the slippery slope of using more powerful and dangerous drugs. In the end, Elmer’s ‘friends’ stole everything he owned. Reduced to homelessness, Elmer was taken in by his sister, Beri, who works as a nurse at Mboppi Baptist Hospital. It was Beri who eventually brought Elmer to the hospital where he was admitted for dehydration, depression, and suicidal ideation. 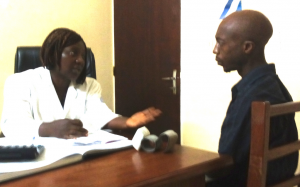 Recognizing that Elmer’s need was more spiritual than physical, we asked one of our hospital chaplains, Chaplain Eveline, to see him. Arriving before we left Elmer’s bedside, Chaplain Eveline consoled Elmer and shared the Gospel with him. In response, Elmer placed his trust in The Lord Jesus Christ as he again expressed the desire to be released from the bondage of addiction. Prior to discharge, he promised to follow-up regularly. I last saw Elmer when he returned for a follow-up visit with one of our most conscientious doctors, Doctor Caroline (pictured here with Elmer). At the time of his follow-up, we reviewed with Elmer the poor choice he had made in opening his home to a couple who were abusing drugs. While on the surface this seemed a good and kind gesture, in the end it proved disastrous. In light of Elmer’s propensity to drug dependence, sheltering this couple in essence represented a “provision for the flesh” (Romans 13:14) by daily exposing him to a temptation too great to resist – namely the temptation to fall back into the dissipation of drug abuse.

As we reviewed these things together with Dr. Caroline, the importance of God’s Word was highlighted in the wisdom it offers to help us to discern truth from error. While Elmer did not have a Bible at the time, he subsequently obtained one and continues regular counseling sessions with Chaplain Eveline.

I left for Mbingo Baptist Hospital at the beginning of October. Chaplain Eveline recently wrote to share that she continues to see the ‘transformation work of God’ evidenced in Elmer’s life. We are deeply grateful.

But put on The Lord Jesus Christ, and make no provision for the flesh, to gratify its desires.