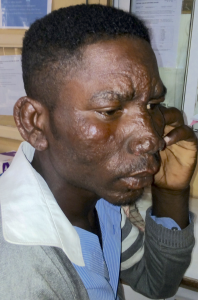 As mentioned in my November letter, I’ve primarily been working in Mboppi Baptist Hospital, located in the coastal city of Douala. However, in December I traveled up to the Northwest Region to spend time in Bamenda – after which I continued on to Mbingo Baptist Hospital some 35 km north of the city. While in Mbingo, I was working with Internal Medicine residents affiliated with the Christian Internal Medicine Specialization (CIMS) residency. Prior to traveling up to Mbingo Hospital, I spent time at our Health Center in Bamenda. While there, I was asked to see a man by the name of Peter, who was suffering from disfiguring nodular skin lesions predominantly involving his face. Coming from the far city of Limbe, he had been to many clinics seeking relief. His disease was progressing despite multiple interventions to treat what consultants had guessed was a fungal infection.

Based on the appearance of his lesions, we were concerned about the possibility of Hansen’s Disease (leprosy). Peter was therefore asked to travel to Mbingo Hospital where we have a department dedicated to the diagnosis and treatment of leprosy. We exchanged phone numbers and urged him to make the trip by public transport. Some two days later, Peter called to say that he had returned to the Bamenda Health Center. The taxi in which he was traveling was forced into an about-face when they encountered gunfire along a major route out of the city. He was pleading for another option, wondering if it was essential that he make the trip.

In God’s providence, that same day, our pathologist, Dr. Bardin, was in Bamenda en route to the U.S. We convened in the lab where, with Dr. Bardin’s help, an incision was made in Peter’s left earlobe. Cells thus obtained from the dermis were applied to a glass slide. With the appropriate stain, bacilli of Mycobacterium leprae were visible under the microscope. After more than a year of frustration, Peter finally had a diagnosis. He was later able to safely make the journey to Mbingo – where our Hansen’s Disease coordinator started him on therapy for lepromatous leprosy.

In the course of his disease, Peter shared that – while he knew of the Gospel of Christ Jesus – he had nevertheless opted to go his own way. Although married with two children, adultery and alcohol abuse had characterized his way of life. In the course of his illness he had repented – all the while hoping for an answer. When the answer came, he was profoundly grateful. After returning home to the Southwest Region, Peter phoned to relate his gratitude, stating that he is continuing to follow The Lord.