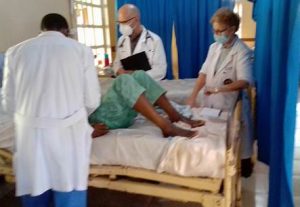 A first-year CIMS resident at the bedside of a patient – here being examined by our outside consultant, Dr. Wirzba.

After I returned to Cameroon during the first week of October, we have been occupied with final exams in anticipation of graduation – scheduled for the end of November. Thankfully, this year our outside consultant was able to travel from Canada to conduct these exams. It may be recalled that, for the past two years, this had been the responsibility of our faculty. The ongoing conflict led to some apprehension as we anticipated Dr. Wirzba’s arrival – given the frequent and unanticipated road blocks. Yet he made it to the hospital in a timely manner – sufficient to give the written exam his first full day with us. Residents are currently undergoing a series of scheduled one-on-one exams, which involve an observed bedside exam and an oral exam. As the senior residents were the first on the schedule, we already know that our fouth year resident passed and will be graduating next month. The celebratory spirit is, however, tempered by the reality of the ongoing political crisis in the Anglophone region. 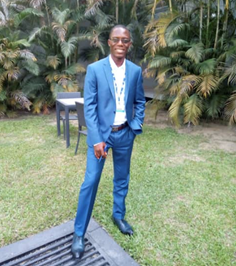 BBH administrator, Mr. Jean Sama, prior to being taken into custody.

A very sad piece of news arrived shortly before I returned to Cameroon. Our beloved hospital administrator in Banso, Mr. Jean Sama, was placed under house arrest in September. His offense was committing the hospital to serve victims on both sides of the conflict.

The hearts of many have been heavy as we await news of this fine man, who, by all reports, has not been ill-treated. His detention has spread from weeks to now well over a month. How inspiring it was, on attempting to contact him, to learn that Mr. Sama is using this adversity as an avenue to share the Gospel with his detractors. While it appears that he no longer has access to his phone, Mr. Sama was able to text the following message in mid-October when I inquired after his welfare: “. . . it’s a great opportunity for me to take the Gospel to a people I would have otherwise not had the opportunity to meet.” His phenomenal attitude speaks for itself!

Another precious staff member whom I’ve known since my earliest days in Banso has suffered the effects of the conflict in a different way. Regina Kohl is one of our ‘turn-talks’ in the out-patient department here – having been transferred from Banso to Mbingo over a decade ago. She is greatly loved as one who goes the extra mile for each and every patient, chasing down doctors for follow-up of labs to shorten patient waiting times and always looking out for each patient’s welfare. Several years ago, Regina – a native of the Kom tribal group resident in Mbingo area – built her retirement home just up the road from the hospital. 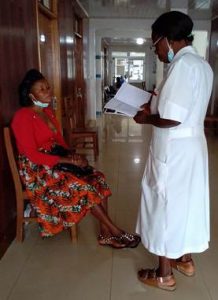 Early on in the conflict, Regina’s home was severely damaged as a result of exchanges between warring factions. She spent the time and effort to rebuild – only to have her home damaged a second time. Recognizing the dangers of living so close to the road (where much of the fighting takes place), Regina retreated onto the hospital premises, where, for over two years, she shared a crowded living space with others who were likewise displaced. Having repaired the damages following the second assault, she again sought to return home. When, in July, two civilians were killed in proximity to her house, Regina recognized that returning home would make her too vulnerable. Having worked for the Health Board for 35 years, Regina is due to retire this December. Unable to retreat to the comfort of her home, Regina is seeking another place to live – still hoping that the house she labored to build will someday be a haven for her.

While most individuals anticipating retirement prepare a large celebration to mark the occasion, Regina is planning a special “Thanksgiving Offering” in her church. She desires to thank God for preserving her and her loved ones alive through the perils of this conflict.