Commensurate with the departure of our graduates at the end of December, we welcomed five new first-year residents at the beginning of the year. On January 28, exactly two months following the graduation pictured, the hospital held a White Coat Ceremony for the incoming residents: a total of five for CIMS and three for PAACS.

The White Coat Ceremony serves as an opportunity for new residents to be formally inducted into residency training. During this brief program, residents recited the Christian Physician’s Oath. In doing so, each resident, while acknowledging the sanctity of human life, pledged to honor and care for every patient as one made in the image of God. This concluded with faculty being called up to lay hands on the residents as the head chaplain led the group in prayer.

For the month of January, I’ve been working with one of the new residents, Dr. Antione, on Women’s Ward. We paired Dr. Antione with an upper-level resident – who was encouraged to teach her younger protégé. It has been interesting to observe the two of them interact. Dr. Antione received his training in a Francophone medical school and so is faced with the dual challenge of trying to apprehend the complexities of Internal Medicine while dealing with a second language.

One of the most treasured times with the residents is our Tuesday morning Bible study. Having recently completed the book of Genesis, we have turned our attention to Exodus. Chapter 1 of Exodus records the names of two Hebrew midwives who were faithful to God: Shiphrah and Puah. These women feared God more than they did the Egyptian Pharaoh. Their actions were used of Him to save a nation. This was the text for the graduation charge offered by our oncologist, Dr. Francine Kouya, to last year’s graduates. While it is true that Cameroon has serious problems, not the least of which is a civil war, only the Lord knows what can be wrought through one or two individuals wholly committed to Him.

We are in an academic setting – using Harrison’s Textbook of Internal Medicine – the standard for many western Internal Medicine residencies. We are trying to embrace many new advances and technologies, some of which are not available to us in Africa. In the midst of the pressures of an academic program, our hope is that graduates and residents alike will recognize that the message of the cross, referred to in 1 Corinthians as “foolishness” in the eyes of a broken world, is our only hope

The graduation ceremony on November 28 with one of our graduating residents, Dr. Nkweta, to the far right. 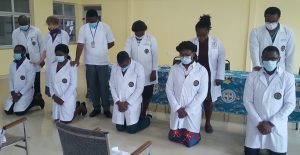 Prayer for five new first-year CIMS residents at what has come to be known as a White Coat Ceremony.