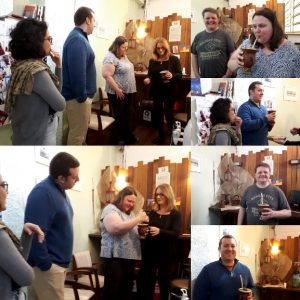 November 16th will mark the beginning of our second year in Porto Alegre. We quickly experienced our first Christmas, New Year, and summer in Brazil after moving here, but we had to wait a while to enjoy the biggest local holiday, which is called Farroupilha Week.

The southernmost state of Brazil once attempted to secede from the Brazilian empire in the 1830s because of tariff policies on their biggest export, which was at that time a form of salted beef.

The war lasted for ten years and got its name from rebels who were mocked by the Brazilian army for wearing ragamuffin clothes, which is what “farroupilha” means. The war ended with a settlement in which the empire gave the rebels pretty much everything they wanted in terms of tax relief and representation.

During the war the militia men setup camps in fields and ate their meat from an open pit barbecue. And so the entire state proudly celebrates this history for an entire week, with the main holiday taking place on the 20th of September each year, when there is a parade in Porto Alegre full of horses and people dressed in 19th-century garb.

The biggest park in Porto Alegre is overtaken for the entire week with people constructing cabins and tents to reenact the days of the revolution with traditional music and lots of barbecue. Our partner missionaries invited us to join them at the park on this special day. The clothes, smells, and sights made me think of the Feast of Booths that Israel celebrated every year.

During this week our language school put up decorations and ensured we learned how to prepare the local Gaucho drink, chimarrão.

In October Marci and our field director in Brazil, Lyndell Campbell-Réquia, went to São Paulo for a Pure Joy conference. This ministry provides no-cost conferences for missionaries all over the 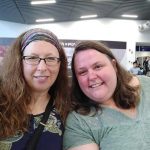 Marci and Lyndell at the conference

world. It was the first time anyone in our family had ventured outside the airport in the biggest city in the southern hemisphere. She had fun.

September marked the beginning of a new term at the seminary. Brandon has been teaching one of his favorite classes, systematic theology. Brandon has had the privilege of preaching and speaking at our church, Central Baptist. The co-founder of the seminary, Pastor Niander Winter, was his interpreter for one of these sermons. Pastor Niander is now retired from the ministry, but he still preaches to our church occasionally. 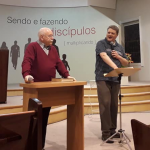 God has blessed us so much through our church as they have welcomed all five of us into their family. In October there is Children’s Day every year in Brazil, and our girls had great fun at the church’s afternoon party on that day. Daniel has also played saxophone at a service.

Last week Marci returned to America to visit her parents in Missouri. Her dad recently had medical tests that confirmed he has cancer. We are thankful she can be with her parents for a little while during his treatment. Remember them in your prayers.

I always thank my God as I remember you in my prayers. Philemon 4