Gary Clatterbuck Get to know Gary

Other posts from Gary


What a year this has been. Our last teacher for the academic year, Steve Neuman, and his wife had a great time serving in Odessa. We now have four to six new courses being offered for the coming year. Marcel Mitchell is going to serve again in the missions program of Odessa Seminary. In the spring, Jon Pettinger and Gene Napier will be teaching courses on counseling and Romans. Raymond Chang of Brea is scheduled to teach in the fall of 2020. We await requests from Russia. With the recent closing (temporarily) of the seminary, the leadership remains very vigilant.

Last spring while sharing a class with Steve Garcia, we were both delayed for three hours, not knowing the reason or the outcome, before being allowed into Russia. It took two additional hours to be able to depart the country at the “security” gates. We will only return if conditions remain stable. We never know what will happen next. 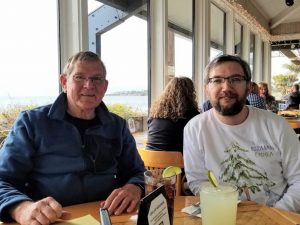 The Jehovah Witnesses were ousted about two years ago, specific churches have been closed or hit from the government, and even the Mormons had some of the same struggles. Though the JW and Mormons are cults, having their status struggling, it worries us that the Baptists may be next. PRAY. Alexy, pictured here with me, joined me for lunch when he was visiting family in Santa Barbara. He is a great source of current news on matters we are a part of in Russia.