Lyndell Campbell-Requia Get to know Lyndell

Other posts from Lyndell 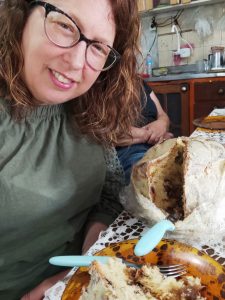 Enjoying the panettone I received from the graduates.

The Kairos Project Brazil is celebrating its first anniversary! Thank you so much to those of you who have given scholarships to the Brazilian Kairos students. Without these funds, this kind of education would not be possible.

We also held an in-person graduation ceremony at the end of 2021, with three grads present. André’s pastor retired, so he was recently asked to step into the role of senior pastor. Renato is serving alongside his wife, who is a church planter. Marcos is associate pastor at his church and is taking his MDiv through Kairos.

We are currently in Canada to visit some of our supporting churches and give reports. Here is our schedule for the next few months:

We would love to see you if you are in the area! Also, if you would like to have us stop by for a visit on a weekday we are in the area, please let me know at: dellcamp@gmail.com. 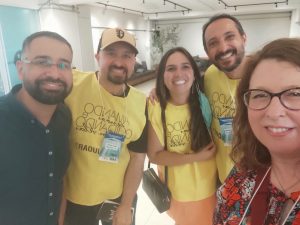 Running into four former students – the three Andrés and Lidiane.

I came back to Canada earlier than Paulo to spend Christmas with my family as it was our first Christmas without my dad. In January, my mom’s sister took ill. Several tumors were discovered in her brain. The doctors are currently investigating. This has been very difficult for Mom as she and her sister are very close. We plan on visiting my aunt during the month of February.

Paulo spent January taking kids from poor communities to the different Bible camps. Thanks so much to those who have contributed to this scholarship program.

If anyone is interested in contributing to the Summer Bible Camp scholarships, you can do so at the following link:
https://give.teachbeyond.org/ (account: Paulo Requia 65056).

THANK YOU SO MUCH FOR YOUR PRAYERS AND FINANCIAL SUPPORT!

If you would like to financially support Lyndell’s ministry, please give to:
nabonmission.org/missionaries/lyndell-campbell/.

If you would like to help fund visiting professors and the Kairos Project in Brazil or help provide a scholarship for a seminary student, please give to:
nabconference.org/give/special-projects/ designating to “Kairos Brazil Scholarships”.