Coming Back to the Country

In bringing these greetings from Cameroon, I’d like to express gratitude to so many who helped to facilitate my travels during the time of Home Assignment. It was truly a privilege to have the opportunity to visit with churches and individuals who have supported the work here so faithfully.

Having arrived into the country at the end of October, I made it up to the hospital, roughly a 10-hour drive inland from the airport, on November 1. The return went surprisingly smooth up until landing in the coastal city of Douala – where there were some delays after disembarking. Customs agents in the Douala airport were very interested in the medical supplies I was bringing into the country, which consisted of suture for use in our operating room. Once everything was duly inspected by the agents, I was released to await transportation to a local rest house.

As Douala is in the Francophone sector, the airport delays afforded an opportunity to use some of the French I’d endeavored to learn while at home. On clearing customs, two young men, who identified themselves as Yaya and Jonas, took the initiative to help with the excess bags. As my Cameroonian cell phone wasn’t yet working, Jonas offered to let me use his device. The kindness of the Cameroonian people never ceases to amaze me. After making a call using Jonas’ phone, assurance came that a driver was on the way. I found it delightful that these two men continued to visit with me, patiently enduring my stilted French, and even correcting my pronunciation on occasion. They both come from the far northern part of the country, which is predominantly Muslim. Yet, while Yaya identified himself as Muslim, Jonas was a Christian. On inquiring about their faith background, Yaya indicated that he was a strong adherent of Islam. Interestingly, he stressed the importance of the fast observed during Ramadan, stating that they consume neither food nor water from 5 AM until 6 PM during the days of the fast. I found his emphasis on fasting very interesting – having come to understand that, during the month of Ramadan, Muslims actually consume more food than at other times of the year because they feast after sunset. Unfortunately, my French was not sophisticated enough to explore some of these subtleties with Yaya. It’s sobering to reflect on how hard some Muslims strive to gain divine favor, oblivious of the One whom God has provided to bridge the gap created by man’s sin. 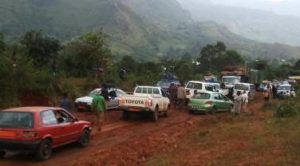 Once a vehicle arrived, I said “au revoir” to my two friends and offered them my contact information should they ever make it up to the hospital. Thereafter, the drive inland revealed road conditions which had deteriorated still further as compared to earlier in the year, leading to one significant roadblock en route to the hospital. By God’s grace, however, I made it back to the hospital and my Cameroonian home.

With Love and Gratitude, Julie