The past three months are split into two segments: Before and after the start of the pandemic. Many of you can likely relate to having your plans come to a screeching halt as the world shut down due to the COVID-19 pandemic. 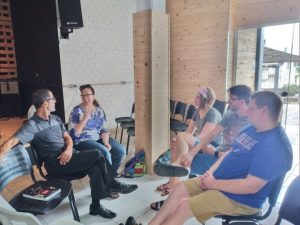 The second weekend of March was the last “normal” weekend of ministry for us. We hosted friends from The Gathering Baptist Church in Kansas City, Missiouri, who were here to look at a sister-church partnership with Igreja Batista de Canoas. It was amazing to sit there and hear two pastors from different cultures come to realize that their churches held similar core values and philosophies of ministry. We walked away energized and excited as the churches even made plans to have a team from The Gathering visit here as soon as the summer of 2021. This is the second of what we pray will be many more partnerships between churches in North America and southern Brazil. These partnerships are a way for the congregations of each church to pray for and join what God is doing across the world. Our prayer has been that both North American and Brazilian churches can send teams to one another to build relationships.

Another exciting development that came early this year was the approval by the seminary president to present the Kairos Project to area pastors. Kairos is a program through Sioux Falls Seminary that would allow a revamping of the current seminary model. It is a “Journey of Discipleship,” where the student gains their theological education through the teaching of an academic mentor, the training of a ministry mentor, and the encouragement of a spiritual mentor. The pastors’ meeting was rescheduled to a later date that is not yet planned, but we still hope to launch this new seminary project later this year.

Like many of you, our churches here have switched to online worship and classes. Even a scheduled face-to-face meeting at Sioux Falls Seminary between Brandon and those in the Kairos program was shifted to the internet. Last month we spent our first Easter as a family physically separated from our church. We dressed up anyways. We went outside, we sang, we read scripture, and we celebrated the resurrection of our Savior together. 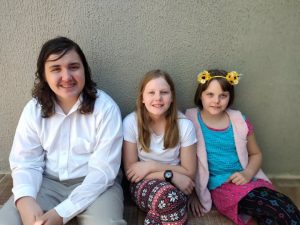 The hardest news for our family came on April 23, when we found out Marci’s Dad lost his fight to cancer and was now in the presence of our Savior. During these past several months, our family has longed to run to his side and be close to him during his fight. Marci was looking into going, when there were sudden travel restrictions placed and the borders of Brazil were closed to non-citizens. Going to America could mean risking that she would be separated from Brandon and the kids for an unknown period of time. Because of this, the hard decision was made that she would miss a final goodbye to her father and could not join her family for his burial in person. Just like all the other things in our lives, we even had to watch the funeral service of our beloved Babu (swahili name for Grandfather) on a screen. Although we are thankful for such technology, this season has been especially difficult for us. And so, the anthem of our hearts cries out again: “On Christ the solid rock I stand, all other ground is sinking sand, all other ground is sinking sand.”