Other posts from Jeff & Sonya

A Time for Every Season under Heaven


Whenever we write a newsletter after we’ve been away for a while, it is strange to write about such extremely different aspects of our life.

When we wrote our last newsletter, I had recently arrived in Canada and Jeff was still in Cameroon, so we were on different continents on our 35th wedding anniversary. (Not the first time THAT has happened on our anniversary!!)

He had an excellent time teaching OT and NT theology and Church History in Lingham and also had a chance to attend a pastors gathering in Bafoussam and do some teaching from his book on the leading of the Holy Spirit. 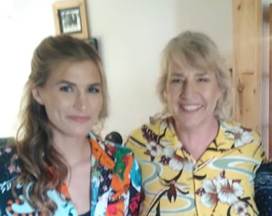 Cari is the only daughter among our four children, so it was very special for me (Sonya) to be able to take a little extra time to go and help her with the many remaining wedding preparations.

Jeff arrived the day after my birthday, but his luggage never made it till two days before the wedding. Our kids were mostly also able to come the week earlier for a family reunion on my side, so they had some great time with cousins. Plus, we had the full week together doing some fun and crazy things, wedding prep stuff, and just hanging out together. 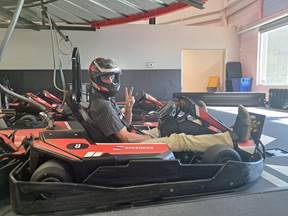 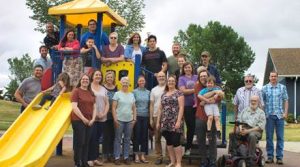 Cari and Sebastien had a lovely, tiny wedding. We’re waiting (still!! impatiently!!) for the official wedding photos, so we’ve only got a very few to share. 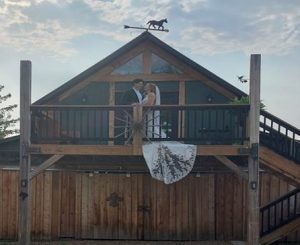 Jeff and I headed out to BC, hoping for a couple of quiet days at our son John’s ‘Pocket Getaway’ tiny home on our way to Kelowna, but we cut it short when we received news of the decline of Jeff’s mom. We arrived in time to spend a few hours with her and one of Jeff’ sisters, praying with Mom and sitting with her as she passed into eternity. We were very grateful that we could be there for her and for a short time afterwards.

So after a whirlwind of family events – reunion, wedding, and a death – we were back in Cameroon by mid-September. One of our donated cell phones and purchased power banks were stolen en route somehow, but the rest of our luggage arrived intact. (Never take that for granted!!) The airline has not replied to our luggage claims, which is frustrating, but I haven’t had the mental energy to follow it up.

Jeff’s proposed class in Mutengene was cancelled, and our plan to apply for Nigerian visas on arrival in Yaoundé was scattered by reports of unrest and problems in Nigeria. So we did some quick shopping in Yaoundé and then bumped and jolted our way back to Banyo – all 575 km of it – in a respectable rain season time of 13 hours (5:00 a.m.–6:00 p.m.).

One of the benefits of serving connected to the Cameroon Baptist Convention (CBC) is that we are almost always stationed near a respectable CBC hospital or health centre, and Banyo is no exception. I (Sonya) started on this letter this week while waiting at the OPD at BHB. In Cameroon, land of acronyms, OPD stand for Outpatient Department – which is kind of a cross between an emergency department and a walk-in clinic in Canada – and BHB is Baptist Hospital Banyo (not to be confused with BBH, the much larger Banso Baptist Hospital in the Northwest, or any other CBC hospital, which likely has a B and H in its initials somewhere).

This little hospital has a little bit of everything, including an eye department, dental services, and physical therapy, and these latter two are the most recent reasons for me visiting. I have been dealing with a litany of small issues again – most recently another cracked tooth. Thanks to those of you who reached out when Jeff shared my recent rib pain issue after a small tumble I took – I feel that is clearing up remarkably quickly. Unfortunately, the clinic here can’t do dental crowns, other than touching it up to prevent aggravation. So, I am likely going to have to take a trip to Yaoundé in the not-too-distant future to the good dentists at Etoug-Ebe Baptist Hospital. (Yes, I think that would be EBH!)

We, along with many other people here, are struggling with the climate shift into dry season. My asthma has again kicked into gear, even though the dust hadn’t really started yet, and 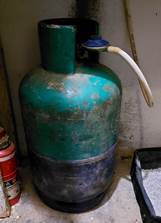 Jeff is suffering from hay fever–type symptoms such as I have never seen in him, nothing earth shattering or life threatening – just stuff that drags you down. We’re playing with meds and teas and other holistic methods to manage all that. Add to that a shortage of bottled ‘gaz,’ which we use for cooking and heating water, and recurring recent problems with our water supply, life is full of a few more daily challenges than ‘normal.’ At least the power has been better than average!!

Our closest LRPG partner, Suleymanu, has been on the road for over a month. He had a chance to get some training in Nigeria and has visited a number of communities along the way there and back and sharing some of what he has been learning. We are looking forward to seeing him back soon – although not as much as his family is!! We’ve got some meetings with Walter Grob and some of our LRPG colleagues that need to be finalized and held this month. And when Suleymanu’s back, I’ve got a village trip to plan – we hope!

I’ve started meeting with the youth on Fridays again, with our World Team colleague Lisa. They’re a very small group this year, but we’ve gotten a few new kids recently who have been on the fringe. These new ones don’t speak much English, so that’s pushing Lisa and I to use our language skills more, which is challenging.

Our Nigerian partners are particularly still experiencing what we might call ‘low-grade persecution.’ They’re not dealing with death threats and public exposure on social media now – they’re experiencing harassment, like intimidation at the bank. There was a positive development this year that the governor brought the clinic’s major medical stuff into the fold – in terms of them being considered government employees whose salaries are paid by the government. But now their opponents have pressured the local health official to not pay those salaries, and they have not been paid in a couple of months. Please pray that these ‘influencers’ will lose their influence somehow and pay will be given to our faithful health workers.

While our own LRPG work has been a bit slower, Jeff has been working on a document for his distance-learning subjects that he may eventually publish. Pray that the distance-learning department will put his skills to work, and plan ahead as they did last year so we can also plan around his proposed classes.

Dear Friends and FamilyMy focus for September to now has been at the primary school again, working a bit more with the teachers. I have had a lot of ups and downs at school this last 6 weeks but have also had a few really useful brain waves to incorporate the reading methodology and also to create resources to help work with our hearing and visually impaired students. Plus, I have a few teachers who really want to benefit from the ideas I am sharing.

I do get VERY frustrated at times, so pray that I can be more calm and more gracious when dealing with some of the issues at hand.

On the issues of practical support, while we ourselves are currently fully funded, you can also help by giving to the Least Reached People Group Special project fund on the NAB website, which funds education, evangelism, and community development projects in both Cameroon and Nigeria. Thank you to those of you who have given faithfully and generously to this work.

We are starting on tentative plans for a brief home assignment later in 2023. Stay tuned for more information later.

You can consider holding on to your old Android cellphones and tablets/iPads (in working condition) for us to help our partners with. Laptops perhaps as well, but they are a bit harder to bring.

Covid and various crises since we came in 2017 have really stymied our plans to encourage short-term mission groups to visit us. However, we trust that we can begin planning such visits now, so we pray that some of you will begin to dream and plan, along with your church leaders, about coming to connect with us and the people we minister to (and with).

Thank you for continued support and partnership.