As the medical work here in Cameroon expands, one of the ever-present challenges is developing an approach to cancer treatment. Routinely in the west, adjuvant modalities such as chemotherapy, hormonal therapy, and radiation therapy are employed – often alongside surgery – in an attempt to achieve cure or remission of a malignancy.

At our level here in sub-Saharan Africa, we now have limited modalities for both chemotherapy and radiation therapy – as well as hormonal therapy for breast cancer. The rate-limiting factor in each case, however, is cost. While some fledgling insurance schemes are being touted, these are very limited in their scope of coverage – such that patients still largely pay for their care out-of-pocket.

Recently, we saw one middle-aged man, by the name of Ibrahim, who was admitted to Men’s Ward. Ibrahim had presented about two years ago to one of our sister hospitals with a right facial mass. The mass was already quite extensive – so it was recommended that he receive chemotherapy prior to any attempt at surgical resection of the tumor. Ibrahim had no money for chemotherapy. As a result, the tumor grew to a point where it is now grossly disfiguring and beyond operability. Ibrahim was recently admitted to the hospital for increasing pain and anemia secondary to his cancer, which has invaded through the facial skin and is intermittently bleeding. During this hospitalization for pain and blood loss, we had an opportunity to speak with both Ibrahim and his carers about his illness. When inquiring about his spiritual welfare, Ibrahim (a Muslim) replied that he was praying to Mohammed. On being asked where Mohammed is now, the answer was “Medina” – which is where Mohammed was buried following his death. When asked where The Lord Jesus now resides, Ibrahim’s answer was “heaven” – which is consistent with Muslim doctrine. (While Islam teaches that Jesus ascended to heaven, it denies that Jesus ever died – and thus denies the resurrection.) 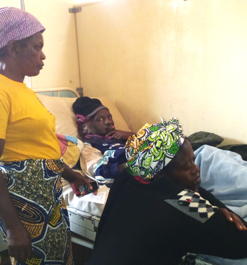 Ibrahim with his carers

When asked if it makes sense to pray to one who is dead or one who is alive, Ibrahim’s reply was, “One who is alive.” He was encouraged to consider that The Lord Jesus died for the sins of mankind, that He rose from the dead, and that He lives today – as the only One who can forgive the debt we owe the Creator. This dear man then allowed us to pray for him in the matchless name of The Lord Jesus.

In this context, we would like to appreciate the chemotherapy assistance fund – established to assist patients with malignancy who cannot afford chemotherapy. Though unable to personally benefit from this fund, our prayer is that Ibrahim might know the greater gift of forgiveness – available through the One who alone can bring peace.

With Love and Gratitude, Julie